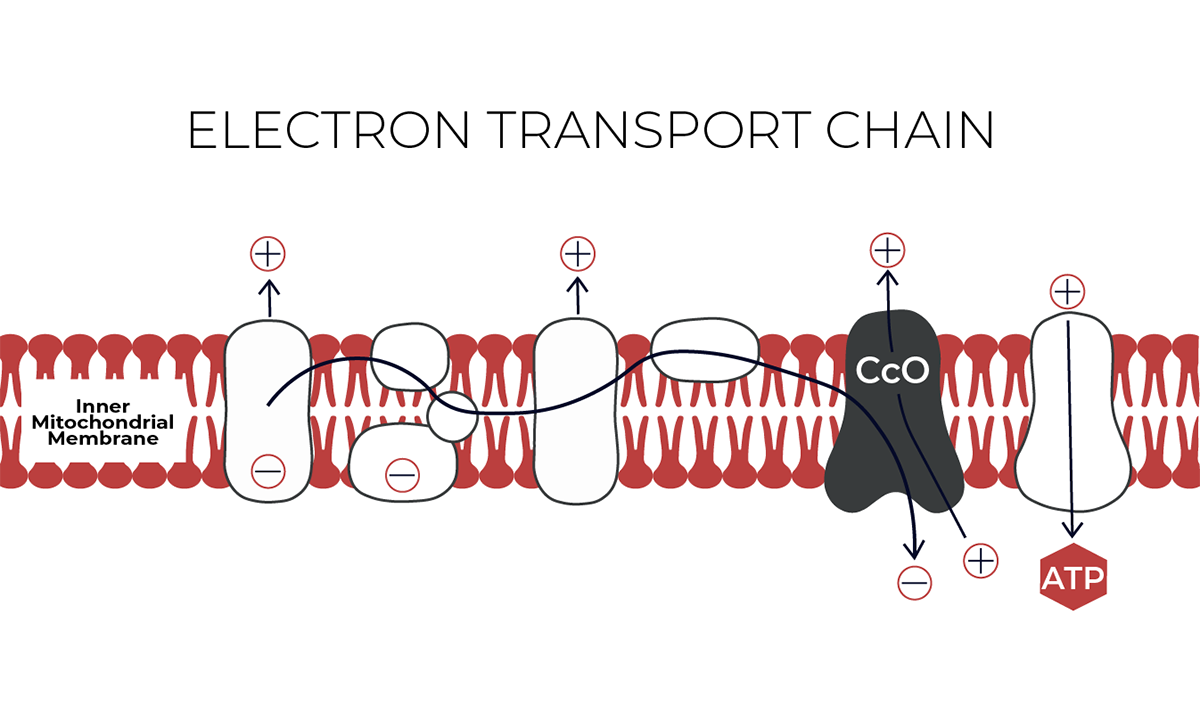 Here at Lux, we believe that consumers should be equipped with all the facts and data behind the products they use. Knowledge is power after all, which is why we want to empower you with the science behind the amazing benefits of red light therapy. But in addition to our values and our belief in informed consumerism, the science is just too cool not to share. So, let’s take a closer look at the cellular mechanisms that give red light its power, specifically a quirky enzyme called Cytochrome C oxidase.

Research into the biological effects of red light therapy strongly suggest that the benefits of red light arise from its impact on mitochondria. Mitochondria, as you might already know, are the site of cellular respiration, the process through which food and oxygen is converted into energy. Through its influence on the mitochondria, red light ramps up cellular respiration, which means more energy for the cell and an overall improvement in cell function.

There are several stages to cellular respiration, but we don’t need to get into the details of those now because when it comes to red light, it’s the last stage that matters most. This final stage of cellular respiration, called oxidative phosphorylation, is the process that creates the majority of a cell’s ATP. It’s driven by activity in what is known as the electron transport chain. The electron transport chain is a series of proteins and other organic molecules located in the inner membrane of mitochondria that serve exactly the function you might expect of something with that name- they transport electrons. As electrons are transported along the chain, a buildup of energy is created, almost like the charging of a battery. This energy is then used to fuel the process that creates ATP.

The final stop along the electron transport chain is a tangled web of light-sensitive proteins called Cytochrome c oxidase (or CcO for short). CcO is assumed to be the means by which red light has its effects because it’s known to absorb (instead of reflect) red light (Hamblin et al, 2016). The ability for red light to influence CcO has been demonstrated empirically as well. For example, a recent study examined small chunks of tissue collected from human forearms following treatment with red light (don’t worry, the humans were cool with it). This study showed that CcO activity increased following exposure to red-light (Wang et al, 2016). Importantly, the increase in CcO activity was accompanied by an increase in blood oxygenation, which is what we would expect if CcO activity was truly ramped up. Other studies have shown that exposing CcO to red light enhanced activity in the electron transport chain, which resulted in an increase in ATP production (Farivar, 2014).

Based on these findings and others like them, the seemingly magical property of red light is thought to stem from its interaction with CcO. That is, when a part of your body is treated with red light, the light waves travel into your tissue, where they are absorbed by CcO. Absorption of red light by CcO enhances its activity, which leads to an increase in cellular respiration and ATP production, providing more energy to those cells.

The fact that mitochondria contain a photosensitive enzyme like CcO is an interesting quirk of evolution. The prevailing theory is that long ago, before the emergence of plants and animals, an ancient precursor to eukaryotic cells (the kind of cells that we’re made of) essentially ate a photosensitive bacterium, which would eventually evolve to be mitochondria as we know them today (Sommer 2020). This bacterium used sunlight to produce energy, much like plants do. The energy this bacterium produced was utilized by its new host cell, which, it turns out, is a sweet enough deal for the relationship between bacterium and host cell to persist for more than a billion years. This mutually beneficial relationship evolved over time and ultimately gave rise to life as we know it!

Thanks to the dining preferences of a prehistoric cell, proteins embedded in the membrane of our mitochondria can react to light, which opens the door for red light therapy. Red light can be absorbed by CcO, which boosts cellular respiration in mitochondria, which leads to enhanced cell function and ultimately a whole plethora of health benefits for us.

Want to join the discussion?
Feel free to contribute!

Q: How do I pre-order an item?
A: Simply add the item to your shopping cart and proceed with the purchase. After placing your order, you will receive an e-mail confirming your order and providing you with an order number. Though a credit card is required to place a pre-order, it will not be charged until your item ships (so please be sure your card is not due to expire between the time you place your order and the time your item is expected to ship).

Q: When will I be charged?
A: You will not be charged at the time you place the pre-order. Only when your item ships will your credit card be charged.

Q: What happens if the release date changes? Will I be notified?
A: If the date is extended beyond the original estimated ship date, we will send you an email update.

Q: What if a special offer or giveaway becomes available after I place my pre-order?
A: No problem. All pre-ordered items will receive any offer enhancements that become available.

Q: Will I be reminded of my pre-order before it ships?
A: No. You will receive a notification only if something about your order has changed (e.g., the release date).

Q: Can I cancel my order if I change my mind?
A: Yes. You can cancel your order any time before it ships. If it has already shipped and you decide to return it, it must be unopened, and you may be charged for the return shipping. Send an email with your order details to orders@luxtherapy.com, and your order will be canceled. You will receive an email with the cancellation for your records.

Q: What if I forget I pre-ordered a game and buy it in the store? Can I return it?
A: Yes. As long as the item is unopened, you can return it for a full refund. You may still be charged for return shipping.

Q: When will I receive my pre-ordered items?
A: Lux Therapy is striving to ship pre-orders as soon as they are manufactured. Our goal is to ensure the timely delivery of a pre-ordered item as quickly as possible.